Come check out the new exhibition “Knowing 360 Jobs in Old China from Cigarette Cards” (从烟画看旧中国的三百六十行) on the upper floor of the Asian Library from January 6 to April 5, 2014.

Cigarette cards, also known as cigarette picture chips, first appeared in 1875 in North Carolina.  They were attached to cigarette packs or boxes as a means to attracting publicity.  In 1885, cigarette cards were brought into China, and they became very popular in the early 20th century when the war of the tobacco trade got increasingly intense.  At the time when photography was still at its developing stage, these finely printed cigarette cards, rich in colors and contents as well as in their cultural qualities of the time, win them the reputation of  “a museum in hand” (一座手中的博物馆） and are highly treasured in the history of art.

“360 jobs” is a collective name used by people in general to refer to all types of jobs in the traditional handicraft industry and occupations in old China. They include jobs relating to clothing, food, accommodation, transportation, entertainment and even street hawking and hundreds of manual laboring jobs of all kinds. This exhibition mainly showcases Desheng Li’s personal collection and copies of cigarette cards that featured the activities of folks from all walks of life in old China.  One can catch a glimpse of what life was like in the late-Qing and early-Republic of China years and the many socio-economic changes that took place thereafter in China. 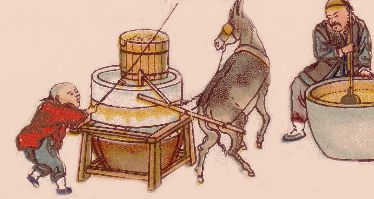 Desheng Li (李德生) is a writer, calligrapher and collector.  He is a researcher of the Culture Regeneration Research Society, a columnist of the Japanese journal History of Tobacco and a veteran member of the United Kingdom of Great Britain Painting Card Association. He has in his collection some 20,000 pieces of cigarette advertising materials produced by both domestic and foreign tobacco companies in China.

In conjunction with the exhibition, Li will give a lecture titled “Cigarette Cards and Chinese Customs” (风行于清末民初的香烟画片与中国民俗) on Friday, February 7th, 2:00-3:00pm during the Library’s Lunar New Year Celebration. The lecture will be conducted in Mandarin with slide show.  For more information on the programs of the New Year celebration, please click here.