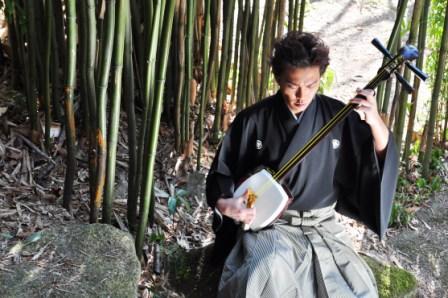 Hiroshi Yamaguchi, one of Japan’s top young Tsugaru Shamisen performers, is visiting Vancouver for the cross-cultural collaborative concert, “Bang Danjos“.  First on stage at the age of 4, Hiroshi learnt Tsugaru Shamisen from his father Koji Yamaguchi and other Shamisen artists.   He completed his undergraduate and graduate degree at the Tokyo Geijutsu Digaku (Tokyo University of the Arts) in 1999 and 2001 respectively.  Since then he has been  a leading member of a new generation of performers in the genre, involving in various performances, workshops, TV & radio programs  in Japan, USA, China, Korea, Germany, Austria, Croatia, Vietnam, Thailand, UK and Spain.  His first album “Kuro Maru” collaborating with western instruments was released in 2011.

On this evening Hiroshi will discuss his journey with the Shamisen: its challenge, the history and his successes. The event will be in Japanese with English translation. Check out here for more information.