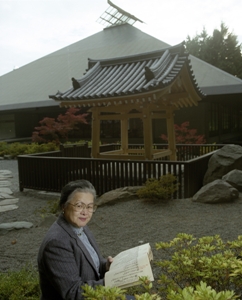 It is with sadness to announce that Ms. Tung King Ng (伍冬瓊), the first Head of the Asian Library, passed away on June 11 at age 92.

Ms. Ng graduated from the Chinese Department, University of Hong Kong on a scholarship with a stellar academic record and pursued library science studies in England. Upon graduating, she returned to Hong Kong where she worked as the Librarian of the Fung Ping Shan Library (馮平山圖書館) at her alma mater. In 1958, she received a Rockefeller Scholarship to the Library of Congress, Washington D.C. and UC Berkeley. She also visited major East Asian libraries in North America, including Columbia, Harvard, Princeton, Stanford, Yale in the same year.

Ms. Ng joined UBC Library as the Head of the new Asian studies division in December 1960, a year after the acquisition of 45,000 volumes of Puban Collections (蒲坂藏書). For the next 27 years, she provided outstanding leadership and mentorship to Asian Library staff, in particular the first Chinese and Japanese reference librarians, Mr. Yim Tse (謝琰) and Mr. Tsuneharu Gonnami (権並恒治). Working together, they developed the largest Eastern Asian collection at an academic library in Canada. 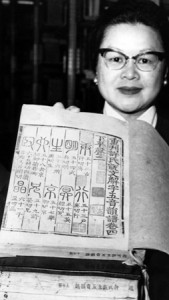 “She was a smart, diligent and strong leader and a pleasant person,” Mr. Gonnami fondly recalls. “Everyone was happy to work with her.” Mr. Tse adds, “Ms. Ng is not only my boss, but a mentor throughout my library profession. She guides my way from a student assistant to a library assistant to a librarian.”

During her career at UBC, Ms. Ng was also a great friend of students opening her home to provide reasonable accommodation to students from Hong Kong.  Many of those students became life-long friends.  Ms. Ng was a devout Christian participating in many activities in her Anglican church including singing in the choir and assisting with administrative work.

A funeral service for Ms. Ng was held in Vancouver at the Anglican Network Church of the Good Shepherd on Friday, June 20th, 2014 followed by internment at Ocean View Burial Park.

In memory of Ms. Tung King Ng, Asian Library is setting up a display showing her pictures and publications. The display will be on between July 2 and 21, Monday through Friday, 9:00 a.m. to 5:00 p.m. at the Asian Centre foyer.

One response to “In Memory of Ms. Tung King Ng”