On June 9, Asian Library joined the Office of the Provost and VP Academic, Chan Centre for the Performing Arts, Campus and Community Planning (C+CP), and University Neighbourhoods Association (UNA) in offering a walking tour and reception for the Chinese-speaking residents living on campus. The overall goals are to initiate a deepening of the connection and relationship between the University and the residents and to foster an intercultural neighbourhood.

The walking tour began at the Old Barn Community Centre at 7pm. Nearly 70 residents with most of them are members of UNA were divided into two groups. Led by Joe Stott (from C+CP) and Alden Habacon (from the Intercultural Understanding Strategy Development, Office the VP Academic), participants were introduced the various attractions, facilities, architectural elements of buildings as well as outdoor artworks while walking along the Main Mall and West Mall. Of course, Asian Centre was one of the points of interest as it is the home of the Asian Library!

The groups arrived in the Chan Centre at 8pm, where there were a mini-tour of the Centre, a short but fantastic performance by Infinitus, followed by a facilitated discussion and informal reception. Asian Library took this opportunity to introduce the UBC library resources and services to the residents by setting up a booth in the glass lobby. We also answered questions on library collections, borrowing privileges, library cards, etc. Thank you Jing, Phoebe, and SLAIS students Veronica & Crystal for taking part in this first cross unit collaboration for the Chinese-speaking residents in the University neighbourhood. 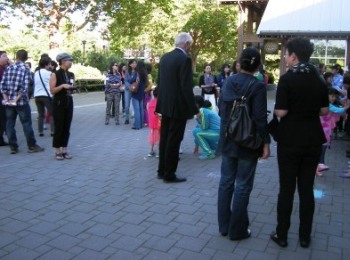 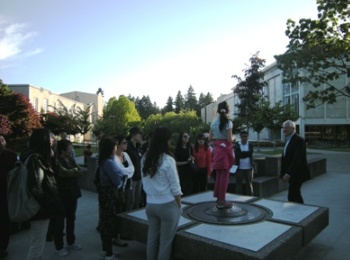 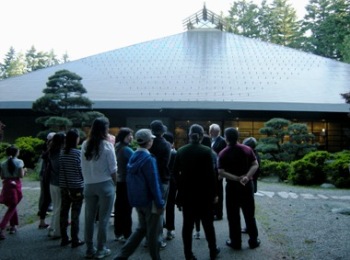 Outside the Asian Centre 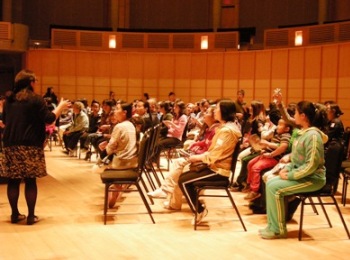 On the Chan Centre stage 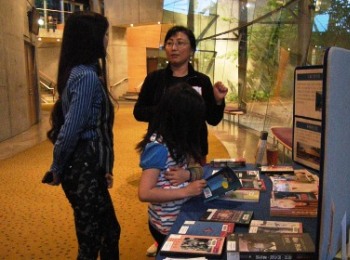