An Elegant Gathering of Confucianists 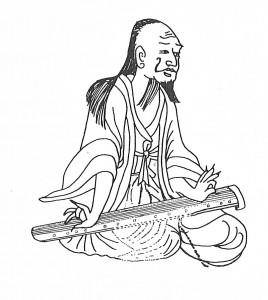 Welcome to join us for a special performance and demonstration of the traditional Chinese arts of qin zither (琴) and calligraphy (書法) – two of the most important accomplishments of the Confucian scholar.  Both types of music and art are experiencing a strong revival in interest in China and around the world, reflecting shared values of the ancient past.

Originally from Beijing, Li Desheng is a renowned calligrapher, writer and collector.  As the Founding President of the Canada Hua Feng Artists Association (加拿大華楓藝術家協會), he participants in various calligraphy and painting exhibitions and gives lectures on calligraphy, oriental folklore, cigarette cards, Chinese operas, etc.  He is currently the calligraphy instructor at the Richmond Chinese Community Society (列治文華人社區協會) and Richmond Senior Activity Centre (老年人活動中心).

Lin Min began her career as a qin (zither) performer in 1992, studying with the great Guangling School (廣陵派) masters of central-eastern China, notably with Lin Youren (林友仁) at the Shanghai Conservatory of Music. Since moving to Vancouver three years ago, she has established a local qin studio and has an active student following.  Lin has been teaching and performing at UBC since 2012.

This event is co-presented by the UBC Asian Library & School of Music, and collaborated by the Canada Hua Feng Artists Association. It is free and open to the public.