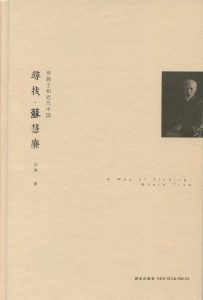 UPDATE: Thank you for your participation! If you are interested in future Chinese book club events, please email your name and contact information to the Asian Library at asian.library@ubc.ca.

Fee
$10 per person, including a copy of the book and light refreshments at both sessions. Spots are limited. Please register early.

This book club will be of special interest to current students, staff and faculty, alumni and community members who have studied Chinese at an advanced level. We will be reading 寻找苏慧廉 A Way of Finding What’s True written by 沈迦 (Shen Jia).

This biography describes the life of William Edward Soothill, a British missionary to China who later became a Sinologist and Professor at Oxford University. Soothill spent the majority of his adult life in China, a country where his story is little known.  Soothill travelled to China in his early 20s and settled in Wenzhou, where his children were born. Over the next 20 years, he built a number of churches, hospitals, and schools in this coastal city. He also learned the local dialect, which allowed him to compile dictionaries and translate the bible. His reputation as a great educator resulted in his appointment as the President of the Imperial University at Shanxi. He then worked in Shanxi for nearly a decade, after which he returned to England and became a Professor of Sinology at Oxford University. While in China, Soothill witnessed the most turbulent time of the nation’s history. His journey illustrates the immense transformation of the country during that period.

Shen Jia started this project to document Soothill’s story while in his hometown of Wenzhou. He traced Soothill’s travels across three continents: Europe, Asia, and America. He spent 6 years immersed in archival research and conducting numerous interviews. Using the method of archaeology of knowledge, Shen’s book reconstructs the vivid story of a brilliant China expert. Shen’s work is both a provocative biography and a scholarly text. Its narrative also reflects the intricate history of modern China.

Shen Jia, born in Wenzhou, Zhejiang in 1969, took his MA degree at the Zhejiang University and his EMBA degree at the China Europe International Business School (CEIBS). He used to work as a journalist, an editor, and then started his own business. He currently lives in Vancouver, and is focusing his research on the relationship between the missionary movement and modern China. He is the author of Putongren: Jiayitang shoucang zhaji (The Commoners: Notes on the Collections of Jiayitang), Xia Chengtao zhi Xie Yücen shouzha jianshi (Annotation on the Hand-Written Letters Xia Chengtao Sent to Xie Yücen), Xun zhao Su Huilian (A Way of Finding What’s True), and Yitiao kaiwang zhongguo de chuan (A Ship Heading to China). Published in the Mainland China and Taiwan in 2013, A Way of Finding What’s True became a best seller immediately. It was praised as one of “The Best Ten Books” in 2013, and the Phoenix Television made a documentary of the same name according to the content of this book.