From Wenzhou to Vancouver, From Yale to Oxford: Journey of Knowledge Archaeology of a Freelance Writer 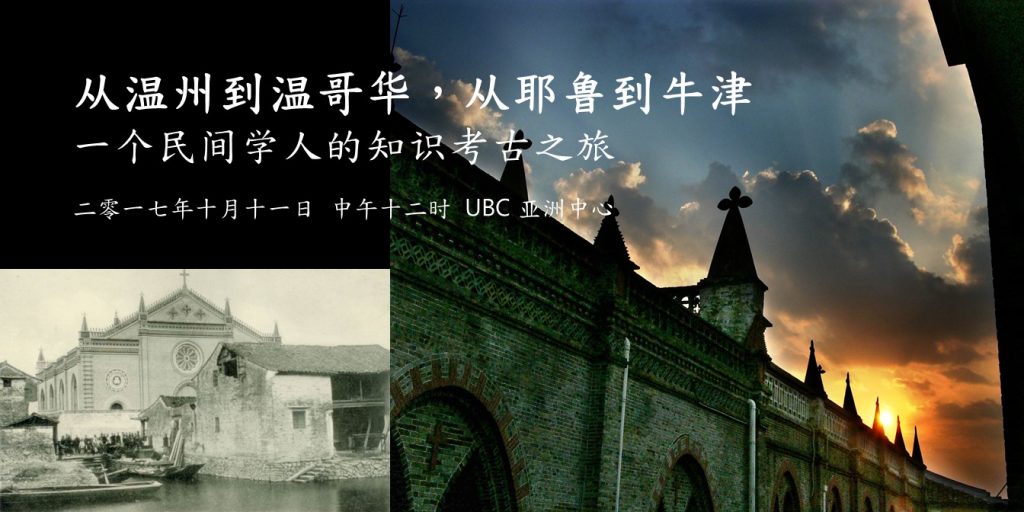 In the old quarter of Wenzhou, a well-known city for its commodity economy in Zhejiang Province, stands a Christian church built about one century ago. However, the name of the builder and his contribution to the city’s modernity were intentionally or unintentionally buried in sudden and perplexing changes of history. Mr. Shen Jia went to this church with his grandmother in his childhood. He majored in Journalism when he was a college student. After graduating, he worked as a journalist, editor, and entrepreneur. He immigrated to Canada and settled down in Vancouver more than ten years ago. Using the abundant collection on modern Chinese history in UBC Asian Library, Shen started writing on his childhood memories in his hometown. His work is based on archival research, fieldwork, interviews, and six years’ of endeavors in Asia, Europe and America. Drawing from the methodology of knowledge archaeology, he brought to life the magnificent story of this British missionary, William Edward Soothill, and his relationship with modern Chinese history.

Written in Vancouver, Seeking Soothill 《寻找·苏慧廉》was published in Taiwan, and then in mainland China in 2013, and became popular immediately. It was praised as one of “the Best Ten Books of the Year” in China and was adapted as a documentary under the same title by Phoenix Satellite Television.

5 responses to “From Wenzhou to Vancouver, From Yale to Oxford: Journey of Knowledge Archaeology of a Freelance Writer”