Summer Book Display: The Education of the Women as Citizens of “Modern Japan” 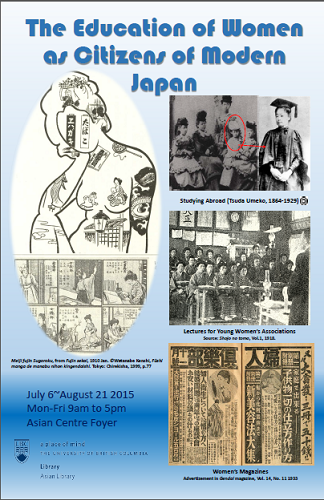 What changes can we observe regarding women’s everyday life, social status and career options during the fast-changing Meiji and Taishō Japan? Did “modernization” in fact mean the same thing, or similar or different, to both women and men? What did the new nation-state expect of its women, and how did they respond?

Our exhibit features select items from the Asian Library collections that help us glean how women at every stage of life were shaped to become part of the modern nation-state, and the social dynamics in accepting, or reacting to, that expectation. Some women were out in front and became pioneers in learning new things from the Western Powers and educating future generations. Some obediently followed the track laid out by the new nation-state toward becoming “good wife, wise mother” (良妻賢母, ryōsai kenbo), a slogan adopted from Victorian England. Some of course were more revolutionary—taking advantage of these new societal changes or refused to accept the ascribed gender role—and went their own ways.

Featured in the display include reports and photographs of schools, women’s magazines, satirical cartoons and advertisements reflecting new views on women. The exhibit also provides an opportunity to explore how the rhetoric of “modern women” evolved with the emerging imperialism and colonialism, and later picked up by colonized countries around Japan.

Please contact either Japanese Library Support at japanese.library.support@ubc.ca or phone the Asian Library Circulation Desk at (604) 822-2427 with any questions or thoughts. We are looking forward to your visit!

Click here for the exhibit brochure to find out more resources.