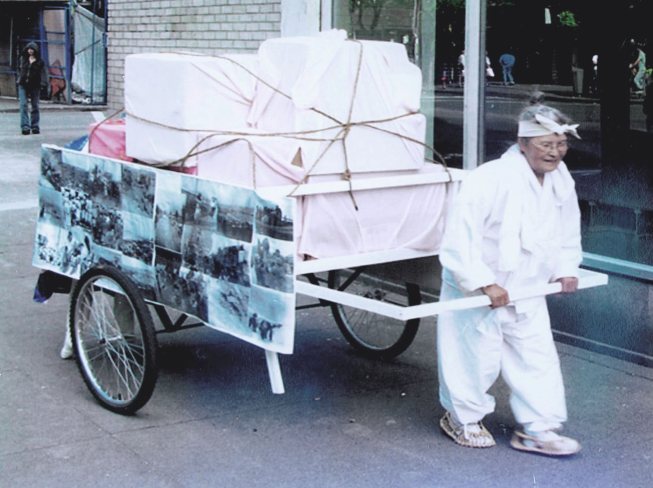 Born in Korea, Ilsoo shares some of her memories of the Korean War in this exhibition. As a child living on a farm, Ilsoo and her family were forced to flee their home with literally what we could carry on a small cart. Food was scarce then and she can remember the many hardships they had to endure while running away from the violence.  Her family was able to return to their farm after the fighting stopped. Ilsoo became a nurse and immigrated to Canada in 1967.

Canada for decades has been Ilsoo’s home and it has reshaped her into who she is today. Living here in Vancouver, she has witnessed a different kind of hardship seen in certain downtown neighbourhoods. This inspired her to re-enact her childhood escape from the Korean War. She is attempting to draw attention to the plight of the downtown Eastside homeless. These works of art blend together the cultural themes that she identifies herself with. 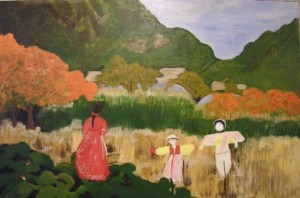 Ilsoo is a multi-media artist. She started painting in early 1997, and continued after retiring from her nursing career in 2002. She graduated at UBC with a Bachelor of Fine Art, major in Visual Art.  She has involved in numerous solo and group exhibitions.  Many of her art works are in private collections in Korea, Australia, the United States and Canada.

Ilsoo’s work is focused in personal identity and expression, as well as themes in the context of Korea and Canada. In her recent work, she is exploring her cultural identity; and in the process, new synthesis is emerging in her own individual practice of painting, drawing, sculpture, printmaking, video, photography, digital imagery, performing art and installation works.

Her works are grounded in the natural world, but looking beyond the scenic or the physical form to search for symbols and meaning in all that she encounters; her style is representation with special attention to colour, texture and form. Ilsoo’s work has been featured in a number of articles in magazines including Senior Living, the Delta Optimist, the Tricity newspaper and YouTube.  For more information, visit http://www.ilsookyung.com/.