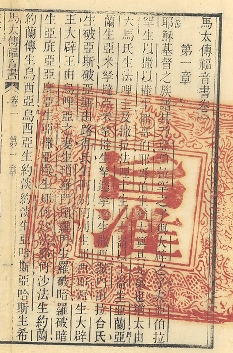 The history of the Protestant translation of the Christian Bible into Chinese is a fascinating one. Beginning with Robert Morrison and Joshua Marshman sharing sources yet working independently in the early 19th century, many versions and editions of the Chinese Bible had emerged in the following decades. No less than 9 major Chinese versions were produced during this vibrant period of translational activities, in addition to numerous dialectical translations plus works such as Chinese-English dictionaries, Chinese grammar works and histories of China. Only after the completion of the “official tongue” version of the Union Version (1919) was there an increasing loyalty and consensus towards a particular version.

Co-presented by Clement Tong and the Asian Library, “The Protestant Chinese Bible – The First Centenary” (基督教華文聖經百年翻譯史) explores a number of precious early Protestant Chinese translations, which take the viewers through the first one hundred years of the Protestant attempt to give Chinese people a Bible written in their languages.

Clement teaches translation skills and cultural studies at Simon Fraser University and New Testament Greek at the Vancouver School of Theology.  He has been a professional and certified translator in Canada for 14 years, serves as a board member of the Society of Translators & Interpreters of British Columbia and a national certification examiner for the Canadian Translators, Terminologists and Interpreters Council.  He is currently working towards a PhD in Religious Studies at UBC.  His research interests include an examination of the early Chinese translations of the Christian Bible completed in the 19th century, and he has often presented papers on the Asian translation and hermeneutics of the Bible at various international conferences.

Come and visit the display on the upper floor of the Asian Library.  It is free and open to the public Monday through Friday, 9 a.m. to 5 p.m. until the end of June.