The Asian Library is pleased to announce that we have recently received three titles of gift from Mr. Robert Ho and The Robert H.N. Ho Family Foundation. The books are now on display at the Asian Centre lobby. 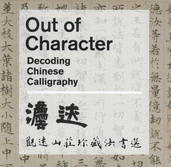 Edited by Michael Knight and Joseph Z. Chang, this catalogue is published on the occasion of the exhibition Out of Character: Decoding Chinese Calligraphy, at the Asian Art Museum, San Francisco, October 5, 2012 – January 13, 2013.  Sponsored by the Robert H. N. Ho Family Foundation, the show includes 40 extraordinary Chinese calligraphies along with three major Western paintings on loan from the San Francisco Museum of Modern Art.

We All Live in the Forbidden City Publication Series
我的家在紫禁城系列

Co-presented and co-published by the Robert H. N. Ho Family Foundation and Design & Cultural Studies Workshop, We All Live in the Forbidden City publication series is a lively interpretation of the Forbidden City that allows readers an opportunity to time travel to the past, visit and learn about the great palace from a fresh perspective.  Comprised of nine books and three maps, this series received the Hong Kong Book Prize and Hong Kong Print Awards in 2010, and the Silver Award from the Design for Asia Award in 2011.

For more information about this publication series, click here.

Co-produced by CCTV9 and the Palace Museum, Forbidden City 100 features a hundred different locations within the Palace Museum all revealing the unseen cultural significance and history of China.  The 100 locations include the well-known buildings standing on the central axis: the Meridian Gate as well as three main palaces on the axis – Hall of Supreme Harmony, Hall of Central Harmony and the Hall of Preserving Harmony. Also highlighted in the series are places that either not accessible to tourists or have never been shown on TV before. The documentary series also illustrates building features such as dou-gong (bracket system) and golden bricks, small structural features that explain the inner meanings of Chinese building and culture.