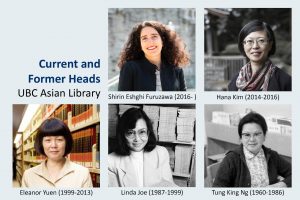 In its first 60 years, the Asian Library was under the leadership of five Heads: Tung King Ng (1960-1986), Linda Joe (1987-1999), Eleanor Yuen (1999-2013), Hana Kim (2014-2016), and the current Head Shirin Eshghi Furuzawa (2016-). Consisted of librarians, management and professional staff, support staff and student helpers, the Asian Teams in different periods of time have dedicated to providing outstanding services with special expertise and great enthusiasm. Many thanks to everyone!

In this section, the Asian Library would like to pay special tribute to Tung King Ng, the founding Head, who laid the groundwork and make significant contributions for the growth of the library. Also meet the Team 2020 in a newly created video. 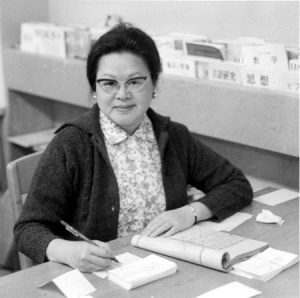 In December 1960, a 39-year-old lady Ms. Tung King Ng (December 2,1921-June 11, 2014) became the first Head of the newly established UBC Asian Library. It was one year after the acquisition of 45,000 volumes of Puban Collection (蒲坂藏書), an incredible amount of Chinese books with numerous rare editions in subject fields such as Chinese classics, philosophy, history, language, literature and arts that would lay the foundation for UBC’s Eastern Asian collection. Ms. Ng was invited to help organize these books and lead the new Asian Library. She is a brave woman in her life, a successful leader and a great member to the UBC Library.

Ms. Ng was born in Hong Kong and graduated from the Chinese Department, University of Hong Kong, on a scholarship with a stellar academic record. In December 1941, the imperial the Japanese army invaded Hong Kong; lots of people escaped while Ms. Ng did not leave Hong Kong. In this month, the Head of the Fung Ping Shan Library (馮平山圖書館) was detained by Japanese, and the young Ms. Ng was appointed as the Librarian of this Library at her alma mater. Her career and connection with rare Chinese books started from Hong Kong’s darkest period in the Second World War.

During the Japanese occupation of Hong Kong, Ms. Ng diligently cataloged Chinese books of the Fung Ping Shan Library. Although she was not trained in this field and made mistakes initially, she learned how to make a catalogue and the discipline of bibliography at work. She also took care of rare books that Lingnan University (嶺南大學) and the National Central Library of Nanjing (南京中央圖書館) had kept in Hong Kong before the Japanese invasion. From October 1942, the United States Army Air Forces (USAAF) attacked the Japanese in Hong Kong by dropping bombs. Although their targets were the Japanese cargo ships, the bombs exploded around the library where Ms. Ng was working. Ms. Ng had to hide under the ladder that lean against the steel bookshelf when the explosion happened– she never gave up her responsibility for protecting these books during the wartime. After three years and eight months, the British forces took over Hong Kong from Japan. However, some people took advantage of the chaos of the administrative transition to steal furniture from the University of Hong Kong, including bookcases of the library. Ms. Ng had to call security for help, and she also implored the robberies, “please don’t move our books!” At last, the library sustained a massive loss of furniture, but books survived.

To Be a Professional Librarian

Between 1955 to 1956, Ms. Ng went to England to pursue professional library science studies. Upon graduating, she returned to Hong Kong and worked as the Head of the Fung Ping Shan Library. In 1958, she was elected as the Chairman of the Hong Kong Library Association. With her success in academics and good work ethics, she received a Rockefeller Scholarship in the same year and explored the major East Asian libraries in North America, particularly the Library of Congress, Washington D.C. and UC Berkeley. She also visited Yale, Columbia, Harvard, and Stanford Universities during the travel and wrote a report about these libraries.

UBC was preparing to establish its Asian Library during the time. After receiving a report of Ms. Ng’s travel to North American Libraries from the University of Hong Kong, UBC immediately sent her an invitation, hoping that she could be a pioneer building the foundation for the development of the Asian Library. Ms. Ng accepted the position of Head of the new library, and moved to Vancouver in the winter of 1960.

A New Life in Vancouver 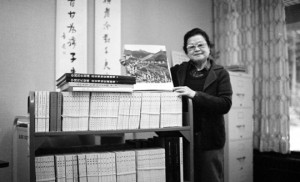 As an outstanding leader, Ms. Ng also provided mentorship to Asian Library staff, in particular the first Chinese and Japanese reference librarians, Mr. Yim Tse (謝琰) and Mr. Tsuneharu Gonnami (権並恒治). She was professional at work, taught practical skills and knowledge on cataloguing, book selection and reference to the first two librarians. “She was a smart, diligent and strong leader and a pleasant person,” Mr. Gonnami fondly recalls. “Everyone was happy to work with her.” Mr. Tse adds, “Ms. Ng is not only my boss, but a mentor throughout my library profession. She guides my way from a student assistant to a library assistant to a librarian.” Working together, they developed the largest Eastern Asian collection at an academic library in Canada.

During her career at UBC, Ms. Ng was also a great friend of students, opening her home to provide reasonable accommodation to students from Hong Kong. Many of those students became life-long friends. She was a devout Christian participating in many activities in her Anglican church including singing in the choir and assisting with administrative work.

Ms. Ng made excellent contributions to the development of the Asian Library. After her retirement, she was invited to a Buddhist Monastery in Northern California to help them set up a library. Ms. Ng dedicated her entire life to libraries and books.