The Asian Centre Building and its Beginnings 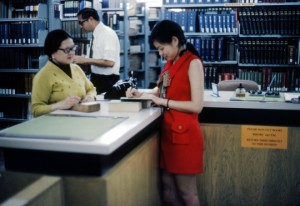 The Asian Library began as a division on the sixth floor of the UBC Main Library (now the Irving K. Barber Learning Centre) located on the traditional, ancestral and unceded territory of the Musqueam people at the UBC Vancouver campus. Nested above the Science division in the south wing of the Main Library, the Asian Studies division was home to its book stacks, desks for the librarian and library assistants, as well as the office of the first Head Librarian, Ms. Tung King Ng. Some may also remember the student carrels that lined the windows facing East Mall. When the Sedgewick Library relocated into a new building on Main Mall in 1973 (later absorbed into the Walter C. Koerner Library), we moved down to the first and second floors, becoming the neighbour of the Map division. Since the acquisition of the Puban Collection (蒲坂藏書)—the central Chinese collection of the Asian Library—in 1959, we have expanded in size over the decade. From the purchase of a rare collection of Japanese maps from the Tokugawa period to beginning its South Asian collection in 1968, the Asian Library grew into a rich hub of valuable materials from Asia. 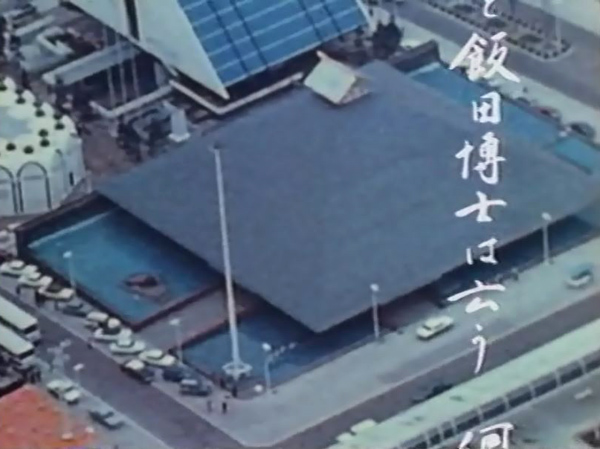 Yearning for a building to mark the Nitobe Memorial Garden and the presence of the growing Asian collection and Department of Asian Studies, Shotaro Iida, Assistant Professor in the Department of Religious Studies at UBC, attended the Osaka Expo in 1970. There, the roof of the Sanyo Pavilion caught his eye. Iida met with Kazuhiko Nishi, the commissioner-general of the Sanyo Pavilion, where the two discussed Iida’s visions to use the roof for a potential building on UBC Vancouver campus. Familiar with the campus and Nitobe Garden, Nishi shared Iida’s vision and agreed to gift the roof and the supporting girders of the Pavilion for the establishment of the Asian Centre building. Construction began in 1974, three years after the Sanyo Pavilion roof and the steel girders arrived in Vancouver in March of 1971. 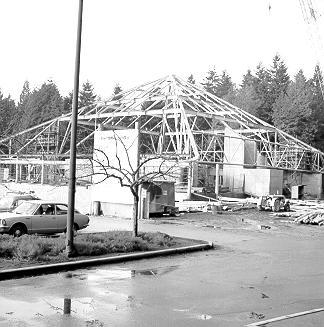 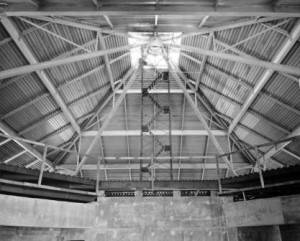 The outer structure of the Asian Centre completed in 1975, thanks to funds gathered from several organizations and fundraising campaigns held both within Canada and Japan. However, a shortage of funds froze the project until the federal government offered financial assistance for its completion. Construction resumed three years later in 1978.

Surrounded by a crowd of over 400 guests, Premier William Bennett cut the ribbon to celebrate the opening of the Asian Centre on June 5th of 1981. Prince Takamado Norihito of Mikasa, the nephew of the Emperor of Japan who was studying law at Queens University at the time, joined Bennett to commemorate a project that began with Iida’s “big idea.” 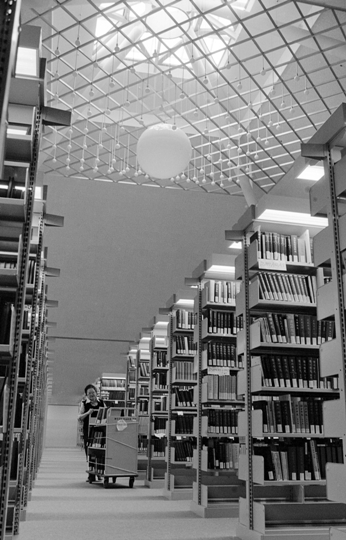 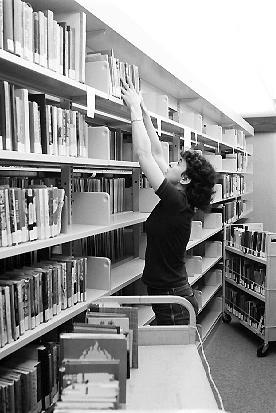 Three decades later, the Asian Centre embarked on a new project involving the replacement of its iconic roof and repairs to its skylight. Driven by the need to deal with leaks in the roof, the project commenced in mid-2012. A new roof equipped with small triangular studs called “snow stoppers” were installed by January of the following year to prevent mini-avalanches from forming in front of the entrance and the reverberating sound of snow sliding off of the ceiling.

New roof of the Asian Centre with snow stoppers (2012)

Around the same time, the lobby of the Asian Centre was reconfigured into an informal Learning Commons creating additional study and meeting space for the UBC community. Along with the installation of an external book return, the Learning Commons came fully equipped with power outlets, a drinking fountain, and tables and chairs to seat up to 36 people. Since its opening, more students have visited and utilized the area to study and gather for small group activities. 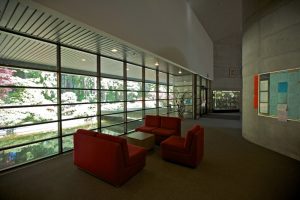 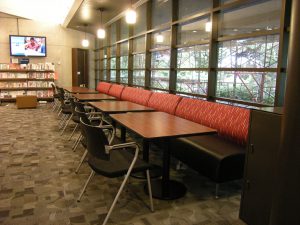 In effort to deliver better services, study and programming spaces, as well as to make numerous improvements for the collection, the Asian Library began preparing for the renovation project of its upper floor in early 2018. Previously, the upper floor had limited seating and study areas as it primarily provided space for book stacks. With the renovations, the Asian Centre users can anticipate a new ceiling, more study spaces for up to 60 individuals, and access to the librarians’ offices! Furthermore, the study spaces will have the capacity to be converted into an open space to host large events and welcome an audience of up to 90 people.

Other features to look forward include the new oversize and reference sections, which will be accessible at two of the four corners on the upper floor. The remaining two corners will be dedicated for the Great Reads collection and language learning materials, aiming to offer a relaxing atmosphere for casual reading and small gatherings such as reading clubs and storytelling. Display cases will also be installed to showcase more gems from the Asian Collection and to accompany future exhibits and events.

Although the physical location of the Asian Library is now closed due to the COVID-19 outbreak, we look forward to welcoming you again when it is safe to do so!